There is an understanding that with authority comes the responsibility to make decisions. Personal style, organizational structure and corporate culture can encourage varying degrees of consensus building and collaboration, but the buck always stops somewhere. In our earlier survey we explored the extent to which such collaboration factored into decision making.

Note: For the moment, we will ignore the very real issue of authority figures who simply refuse to make the tough decisions!

A number of respondents felt that, in their organization, those in authority tend to make the decisions where important issues are concerned. This could mean adherence to a traditional top-down structure, but there are different ways to convey a decision from above. A savvy leader can walk into a meeting with their decision already made but create the feeling among others that the experience was very collaborative. A more straightforward leader (or leadership team) may adopt the tell-and-sell approach whereby they demonstrate the rationale that went into picking one side of a trade-off situation.

From our survey results, a “blackbox” may be a more fitting metaphor for some such top-down organizations because priorities tend to conflict and information tends to be closely guarded. Based on our survey, of those who perceived a top-down decision structure, 2 out of 3 believed there were “conflicting priorities” and more than half also indicated that “information protection” was the communication norm. 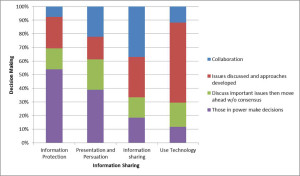 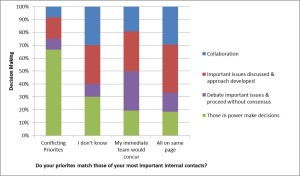 You can see how these connections can emerge: Department A operates under the marching orders that anything goes as long as we achieve Priority A. Department B feels the same way about Priority B. There is no clear guidance for either group (from leadership) about the impact on the overall desired performance. When a stalemate occurs, the boardroom fills up, the doors close and after some time a verdict appears.

From outside the boardroom, this would resemble waiting for an instant replay decision to come down from the booth. That people communicate on a “need to know” basis is understood; it is akin to court proceeding where anything you say could be used against you. This is how the walls of the metaphoric silos emerge and thicken.

As with our earlier piece, we isolated some implications from such a “black box” leadership environment:

For Collaboration with External Stakeholders:

External parties can get roped in to the drama resulting from internal efforts to curry favour with upper management. Suppliers, customers and partners may be sympathetic to the plights of their contact having to work in such a political environment, but revealing this level of in-fighting to an external party rarely paints the organization in a favourable light.

Often times the task at hand is difficult enough to begin with, so why burden yourself with the additional strife from the internal squabbling or playing to the judges? “Pitch the idea to authority to gain compliance from others” is not a workable definition of collaboration in environments that need to take performance seriously. Training can make it worse (see below).

The approach for newer organizations with respect to this particular problem may well be preventative. One of the characteristics of growth is the creation of different “departments” that must operate with a degree of autonomy. There is an opportunity early on to paint the connections within the wider organization so all departments are focussed on the same priorities and silos don’t develop as rigidly.

We have found that requests for training in such areas as “making business cases” and “influencing” stem from an environment where a common understanding has not been allowed to take hold. Building communication skills in warring factions can deteriorate into a cold war of building persuasiveness. There may be an opportunity to build a common understanding by fleshing out the potential links between actions and desired results.

(Note: The semantics of the words “influence” and “persuasion” where explained to me very well by my friend Mark Bowden. Using influence means understanding the logic of the other party and weaving your wants and desires into that logic. Persuasion, on the other hand, is getting a person to trust you to the extent that they are happy to abandon their own logic if you say, “Trust me. It’ll be OK.” We would prefer a focus on the former.)