Let’s describe “an organization” as a collection of people with some degree of shared purpose (what we are doing) interacting within norms of some similarity (how we do things).

The “how we do things” can be dictated by formal policies, guiding language and/or understood norms. Each workplace context, in my experience, is different, so a brilliant element from one context does not guarantee success in another. So questions like “what if Disney ran your hospital?” make me cringe, as would an efforts to replicate Google’s success by adopting its famed policy of mandating one day per week to work on things unrelated to your job.

By their very nature, “rules” tend to have “exceptions,” which brings additional complexity, as does the ability and willingness to enforce the rules. There are also predictable negative responses to overt rules and guidelines. For illustrative purposes, and to take a break from conceptual discussions, let’s look at a tangible example of one “rule” and its impact: the off-leash dog park. If this environment were a workplace, the misalignment between this stated rule and the observed behaviours would create a poisonous culture. 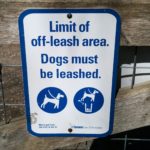 NOTE: At the risk of stating the obvious, the “off-leash” part of these particular parks suggests that it is OK to have your dog “off leash” in this area, and “against the rules” to have dogs “off leash” in other areas.

If there is a rule that no one follows, let’s call it a bad rule. Well meaning people don’t follow “bad rules” because it is nonsensical and enforcement is sporadic at best. (e.g. keep the dog on leash when the bylaw officer is around). The logic of some rules can conger up Jerry Seinfeld’s comedic questioning of the California motorcycle helmet law intended to protect a brain whose judgement was so poor as to ride at high speeds with no protection whatsoever.

So, if the “off-leash” rule is a good rule, let’s explain some of the underlying logic: this creates designated space creates where people can’t complain about the dogs being off leash. If you don’t like being around dogs that are off leash, don’t go in there. As both a dog owner and a parkland runner, that is the exact reason why I choose not to run in the off leash areas. Make sense?

In a workplace context, efforts to demonstrate compliance can create vast numbers of rules and regulations. In the practice of collaboration, an over-developed need to reduce culpability risk can take away from the positive effect of good rules. If you have a good rule, it would be a useful practice to provide the rationale and/or be ready to answer “why?” should it arise. (On the latter point, the guidance “Ask Why?” has been forever sullied by its association with Enron.)

There are competing ways to explain this one with differing levels of empathy toward the infractor. Aaron James, in his book “Assholes: A theory” suggests that one quick way to identify his study subject is to listen for “do you know who I am?” as a response to any assertion of rules and norms. The quip implies that if you did know, you would know that I constitute an exception to the rule. I have witnessed interactions on December 26th taking place across a counter with bold signage, “No Returns on Boxing Day.” To my chagrin, as one who appreciates good rules, the manager made “an exception” further reinforcing the attitude that the rule applies to those who don’t have the nerve (or lack of shame) to push back.

There is a less entitled mindset that, in the context of the off-leash park, will say, “Those off-leash parks are for dogs who are poorly behaved when they are off leash. My dog is fine to be off leash anywhere because he/she/it would never misbehave and hurt or startle someone.”

So back to the underlying logic: can we say that, in general, we don’t want dogs hurting or startling other people? Hurting is after the fact, which makes it tough and invokes another set of rules for dogs who have bitten. Startling can be in the eye of the beholder (e.g. don’t worry, he’s friendly offers little assurance), so, if you are easily startled, don’t go in off-leash area. Does that make sense?

Even good rules have an uphill battle. David Rock’s SCARF model reveals that we have an uncontrolled neuro-biological resistance to anything that threatens out Autonomy (e.g. my ability to determine what is right for me). External rules are a direct assault on this, which makes any attempt to provide constraints on behaviour an uphill battle. We all have different levels of self-imposed guidelines of what we will and will not do, so if we are shaping our own behaviour, this resistance can be reduced.

Some nuanced discussion can align some underlying self-regulators with external constraints. So, the speed limit on the highway is not about a number, it is about driving safely. The sign on the post of the off-leash area is not about a boundary, but about what people can expect in different public spaces. Shoring up this space also takes the pressure off enforcement because you are doing the “right thing” for your own reasons.

If there were short take-aways from this discussion, how about these:

All the best creating and shaping the rules by which you roll.